Recently, I’ve developed a strange love. Out of everything in the world I can be intrigued by, such as cute animals, nature, or unusual facts about Germany, this time, my love happens to involve a simple geometric shape.

An equilateral triangle, to be exact. 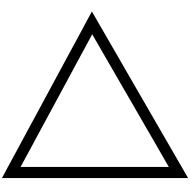 In symbolic terms, the triangle can represent everything from the holy trinity, to creativity, harmony, illumination, to popular triads such as “spirit, mind, body,” “love, truth, wisdom,” and “past, present, future.” And I guess maybe threesomes as well.

On a physical scale, the triangle is most commonly found in pyramid structures. For thousands of years, the pyramids used to be the largest structures in the world – no doubt the most popular being the Great Pyramid of Giza in Egypt. Pyramids were considered to be a form of “resurrection machine,” as the Egyptians built them as a gateway to the heavens above. As the tip of the pyramid pointed toward the sky, it was believed that the soul of the buried Pharaoh would launch into the abode of gods.

While we may think of pyramids as being strictly Egyptian, they can actually be found all over the world. Here’s a few popular examples. How many have you visited?