69 facts is back! This time featuring the lovely country of France, because well, who can resist a country that creates superior wine, beautiful art and genetically blessed people? I think 69 facts is quite fitting. After all, who doesn’t love the French? (when they are not driving, of course).

1. There is a Victor Hugo street in every town in France.
2. It’s illegal to name a pig Napoleon in France.
3. Charles VIII had six toes on one foot and hid this fact by wearing and promoting square toe shoes.
4. The guillotine was the official method of execution during the French Revolution. It was invented by a surgeon named Dr. Guillotin.
5. France produces over 400 types of cheese!

Language:
6. French is the official language of many countries including: Switzerland, Canada, Ivory Coast, Luxembourg, Monaco, Congo and Niger.
7. The word “salut” means both “hello” and “goodbye”
8. French was the official language of England for over 300 years.
9. It’s the mother tongue of 75 million people worldwide.
10. It’s the second most commonly taught foreign language, after English.
11. It’s the official language of the United Nations.
12. It’s the only language (along with English) that’s taught in every country in the world.
13. Crayola is a French word that means “oily chalk”
14. At the time of the French Revolution, 75% of French citizens didn’t speak French as a mother tongue.
15. Non-French celebrities who speak French include: Jodie Foster, Johnny Depp, Diane Kruger, Elton John, Ewan Mcgregor, Halle Berry, Jackie O, Madonna, Mick Jagger, and John Travolta.
16. 34% of the French can speak English.
17. Between 6-11 million Americans speak French.

18. Mont-Blanc is the highest peak in Europe
19. The heir to the French throne was called Le Dauphin, which also means “dolphin.”
20. The French eat snails, frog’s legs and horsemeat.
21. In 1386, a pig was hung in France for the murder of a child. 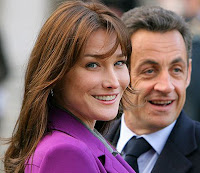 22. The number of times the French kiss each other as a form of greeting varies depending on region. In Corsica, the number of kisses can be as many as 5! (If you have a hot first date, you now know where to go)
23. According to a 2003 survey, the French have the most sex in a year (unsurprisingly!)
24. It’s illegal to kiss on railways in France (oops).
25. “French kiss” is a term by the English as a slur on the French culture which was thought to be overly concerned with sex.
26. In France, it’s called a tongue kiss or soul kiss.
27. French men have the lowest level of obesity in the EU, and women are second after Denmark.
28. The French have one of the highest life expectancies in the EU (I think there’s a strong correlation of this fact to #23)
29. First Lady Carla Bruni has been known to have a string of relationships with famous men including Eric Clapton, Mick Jagger and Donald Trump.

32. The French had an early version of the internet called Minitel, where as long as 1984, they could pay bills and shop at home using the Minitel service.
33. France is the most visited country in the world with 75 million tourists yearly.
34. The first department store was founded by Aristide Boucicaut in 1838l
35. France has wont he most Nobel Prizes for Literature than any other country in the world, and the second most in mathematics.
36. France created the first universal declaration of human rights in 1789.
37. France ruled the second largest colonial empire in the world controlling 8.6% of the world’s land.
38. Famous French inventions include: the hot air balloon, the submarine, and the parachute.
39. In 2004, the French produced 56.6. million hectoliters of wine.
40. French liquers include: Grand Marnier, Triple Sec, Cognac, Armagnac, Pastis and Cointreau.

The French Revolution
41. The storming of the Bastille was more of a symbolic act. During that day, there were only 7 prisoners and 4 of them were there because of check forging.
42. “Let them eat cake” was a statement falsely associated with Marie Antoinette as it was created ten years before she was born.
43. The guillotin was last used in 1977.
44. It was during this time that the French invented the metric system.
45. More than 15,000 people were beheaded at the guillotine.
46. Louis XVI assisted in perfecting the guillotine.

Paris, the city of love

47. 20% of the French live in the Parisian region.
48. Nicknamed “city of lights,” lights actually refers to the number of intellectuals who live there.
49. Jim Morrisson and Oscar Wilde were buried in the Paris cemetery called Pere Lachaise.
50. The Eiffel Tower is painted every 7 years.
51. The Eiffel tower was originally intended to be dismantled and sold as scrap after its construction.
52. There are more Bretons (From Britanny) in Paris than in Britanny.
53. The oldest bridge in Paris is called Pont Neuf (new bridge).
54. The most visited attraction in Paris isn’t the Eiffel Tower (5.5 million), or the Louvre (5 million), but Disneyland Paris at 13 million people.

Misc
55. French film production is second in the world.
56. Napoleon was 5’6.
57. French toast and french fries aren’t French inventions.
58. The croissant was actually invented in Austria.
59. The ministry of health once tried to promote milk as the national drink of France (ha!)
60. France is about the same size as Texas, with twice the population of California.
61. France is home to 28 UNESCO World Heritage sites.
62. There are about 2 new cook books that are published everyday in France.

63. Drugstores in France usually have a neon green cross on the door57. French toast and french fries aren’t French inventions.
64. If you cross your glass with someone else when toasting, you will receive 7 years of bad sex.
65. Grasse, France is known as the Perfume Capital of the World.
66. About 20& of French territory lies outside Europe.
67. Wearing a white wedding dress is a French tradition which began in 1499.
68. France was originally named Lutetia.
69. It’s against the law to take pictures of police officers and police vehicles.

Disclaimer: my blog is mainly for entertainment purposes, and not an encyclopedia. These fun facts came from information that my friends have told me, that I’ve witnessed, read, or stumbled upon on the internet. Some of these facts may be out of date and therefore, I do not suggest anyone quoting these facts for a research paper, or use in life or death situations.