After being in Paris for what seemed like years (well, actually it was just two and a half days), it felt like such a nice change when everyone around me spoke German on the train to Aachen. 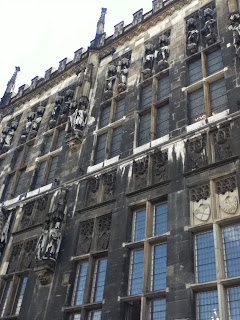 I decided to visit Aachen first since it’s only about two hours away from Paris, and my friend Andreas lives there. He’s awesome and enjoys reading my blog everyday (Hi Andreas!!).
Compared to Paris, which is like this huge, sprawling metropolis, Aachen is this little town that is quite cute. Also unlike Paris, when you hesitate to cross the road in fear of death, nobody is shouting “allez!” from behind you. Actually, crossing the road is quite safe in Germany which is nice since we have enough things to worry about in life such as global warming and nuclear bombs.
While I do enjoy French architecture, it was definitely nice to be somewhere more modern looking…and admirably clean. The city centre consists of nice cobblestone paths and some really nice buildings such as the Aachen cathedral.
My Lonely Planet guide book listed the “Puppenbrunnen” as a top attraction, so it was pretty surprising when it actually turned out to be this tiny fountain that took about 5 seconds to look at. Although I must admit, it is a nice fountain. Fountains back home would never make it into a Lonely Planet.
While I was visiting Andreas, we also went to Cologne one evening/night/early morning. While the Aachen cathedral was impressive, it’s hard to compete with the one in Cologne, which took 600 years or so to build.
Walking across the bridge to the cathedral, I noticed that there were locks chained on to the fence by couples, like the ones I saw at the Louvre. Of course, Andreas was quick to point out that it actually originated from Cologne, which makes sense since Germans are always inventing cool things like nice cars and gummy bears. 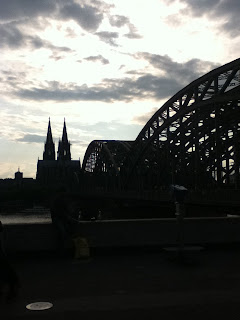 We went to this restaurant where I tried this thing that looked kind of like pizza but isn’t for the first time. It was also when I discovered that ice cream in German is just called “Eis” (ice).
Cologne apparently, is the place to have a bachelor party as we saw groups of guys everywhere wearing matching t-shirts participating in drunken activities. Also I googled it and it seems  that the matching shirts thing is a big deal in those German bachelor parties. How interesting! 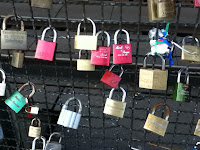 We went out for some drinks and to this club which played top 40’s music (much to Andreas’s dismay and to my secret liking). Although I guess it would be more interesting if the club played very German music instead. I had purchased a German Rail Pass for my trip so it was really easy to take the trains whenever I wanted. After a great first few days in Germany with Andreas, I was on my way to..Düsseldorf.