Being in Berlin reminded me of my life in art school – slightly chaotic, random, filled with more art than you’re able to see in a lifetime, and with so many hipsters, it makes you wonder which factory is producing so much spandex.

Being from Toronto where the subway map looks like this:

And the subway map of Berlin looking like this:

I think I would still be in Berlin trying to figure out this map if I didn’t have my wonderful German friend Martin pick me up from the Berlin Hauptbahnhof.

With so much culture and history, sometimes walking down a different street makes me feel like I’m in a different country altogether. I mean, a stroll down one street feels very German (fun), then another feels very communist (not so fun), and some places like the Sony Centre looks so modern it’s hard to believe you’re still in Europe.

I remember reading somewhere that Berlin was ever-changing. I mean most cities are, but take this as an example: when I went to visit Martin, he just got back from Australia (where we met) two weeks ago. Aside from his year abroad, he’s lived in Berlin his whole life….and yet, as he was showing me around his hometown, he was surprised at all the new buildings that didn’t exist a year ago, and the old ones that disappeared.

During the first day in Berlin, we took one of those double-decker streetcars and Martin, who probably takes the prize as being the world’s fastest tour guide, takes me to all the major touristy attractions such as the Brandenburg Gate, the Reichstag, the TV Tower, Holocaust Memorial, and the Berlin Wall in about three hours. I actually really loved the idea as we were able to spend the rest of our time together (about three days) doing  “local” stuff (which was what I wanted) without me feeling guilty that I went all the way to Berlin without taking a photo of the famous Wall (which, of course I took tons of pics).

One of the coolest places Martin took me to was this art house called Tacheles. It’s a multi-story building filled with hippies and stoners who work and sell their art in their studios. Apparently there’s plans to take the building down, which I hope doesn’t happen despite the fact that the place reeks of beer, weed and piss (then again, it doesn’t smell any worse than some of the warehouse parties I’ve been to in art school). 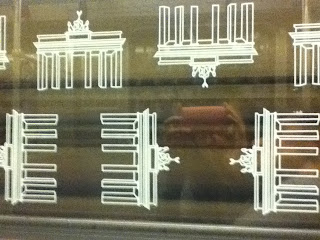 I asked Martin where I can find the upside down Brandenburg Gate in Berlin, and he told me that it’s an attraction that’s only viewable after taking lots of shots of vodka… which he happened to have quite a few bottles of at home. Aren’t I lucky? All I can say is, if you haven’t seen it, I’d highly recommend it!

One of the things I did regret was not planning my trip in a way that my visit to Berlin fell on the weekend. While me and Martin did have fun going out at night, I would’ve loved to be there for the infamous Berlin nightlife at its best. Having that said, after going to Berlin, it’s definitely at the top of the list of cities I’d like to live in when I move to Germany next year.

As David Bowie once said about Berlin, it’s “the greatest cultural extravaganza that one could imagine.” Love it or hate it, Bowie says it best.