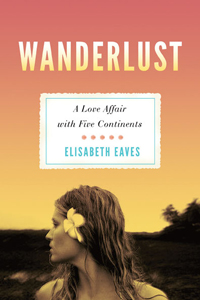 Hey guys, sorry I haven’t updated in so long! I’ve been really busy lately with work and have been spending all of my free time outside (summer in Canada is so short, it should be a rule that any day over 20 degrees should be spent on a beach or by the lake).

Anyway, I’ve just recently finished reading a travel memoir called Wanderlust: A Love Affair With Five Continents by Elizabeth Eaves. I first saw it at a bookstore, when the title first caught my eye. The author is Canadian, and the memoir is about her romances and adventures abroad. I immediately purchased it, because well, her life sounds quite  like mine…

The memoir begins with Eaves talking about her first boyfriend who introduced her to the world of travel, as well as her university exchange to Cairo. The book spans over about a decade of Eaves’s life, from her university days to her early thirties. I loved and was intrigued with the book from that point as she spoke of her time in countries I’ve never even thought of visiting, such as Afghanistan. She challenges herself to take on new adventures, and despite the risks, does not question about venturing off to the Middle East and the jungles of Papua New Guinea. The worse fear, which resonates in the hearts of anyone affected by wanderlust, is of course, the thought of returning home.

One of my favourite parts in the memoir are the chapters she writes about her time in Australia. Focusing primarily on Airlie Beach, where she spent most of her time, her descriptions of the beach town and the surfer boys catapulted me back to my own memories of my time in Australia last year. At one point, I had to put the book down entirely as I was too saddened by nostalgia.

Her memoir concentrated a lot on her relationships on the road, which intrigued me at first, but simultaneously depressed me near the end of the book. I find Eaves brave how she can write about her relationships so openly, as while I’m usually found scribbling feverishly in my journal, most of my relationships I find too personal to really share with anyone other than some close friends.

The fact that Eaves indulges in so many meaningless, nameless hook-ups while abroad, describing sex as simply “fucking,” felt like I was reading about a college frat boy rather than a girl my age. Her meaningful relationships always end up with Eaves running away to another country, resulting in broken hearts. I loved reading about Eaves’s love affairs with foreign men while she was in her early twenties, but when she’s thirty and running away from men who she claims she loves, and who offer her marriage proposals, running away seems childish.

I loved this memoir as it is written by a female travel writer who shares much of the same beliefs I have about life and traveling. While I love and admire her boldness, her fear of relationships also worries me about the future of my wanderlust inflicted life. I highly recommend this memoir for a light summer read, however, the end of the book makes me question life and love in a way that I’d rather save for a cold day in front of a fireplace with a cup of hot chocolate.