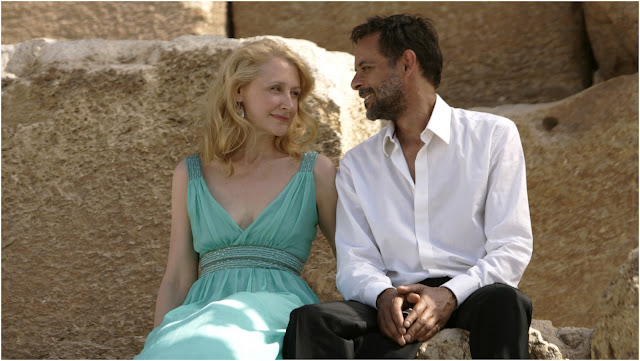 Last week on the train, I randomly decided to rent one of those 99 cent movies from the iTunes store from my laptop. Because movie posters with depicting pyramids always gets my vote, I quickly settled on a movie I’ve never heard of called “Cairo Time.” After watching the movie, I must say, that was probably the best dollar I have ever spent (well, maybe not including that one time I was dying of thirst, and bought a big gulp from 7-Eleven. The miracles of American sizing!)

For those of you who are into movies set in exotic locations, filled with the possiblities of romance, and lots of hookah smoking, this movie is for you.

Patricia Clarkson plays a magazine editor named Juliette, who travels to Cairo with the inital intention of vacationing with her husband, a UN official working in Gaza. Her husband is in a work dilemma and has to delay Cairo for a few weeks. He then entrusts his Egyptian friend Tareq (Alexander Siddig) to show Juliette around the city.

At first, Juliette seems completely overwhelmed by Cairo, but somewhere in between smoking hookah with strange men and taking a boat ride down the Nile, she falls in love with Tareq. Of course, she is married with two kids, but when you have a dashing Egyptian man wearing a jellabiya in front of you, husbands just seem so irrelevant.

The movie has a slower pace that really allows you to take in the breathtaking beauty of Cairo. The music is beautifully suiting, and the film also touches upon more serious issues of gender inequalities, and the differences between the east and the west. Despite the grandeur of Cairo, the chemistry between Tareq and Juliette is so compiling, that I was secretly hoping for a passionate affair to spring out of their innocent friendship.

“They say that if you drink water from the Nile, you will always come back.”

Verdict: A must see. Especially for 99 cents, it would be a crime not to watch it at least once.