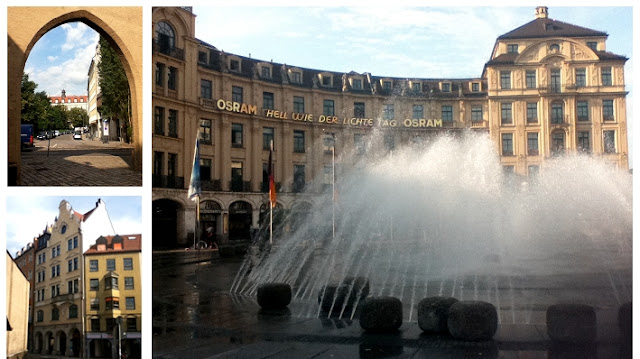 Bavaria can quite possibly be the best place in the world. After all, they did invent lederhosen, pretzels, and an annual festival dedicated for the sole purpose of drinking obscene quantities of beer.
I’m not sure why I have such a love affair with Bavaria, although it could be because of all the photos my German prof used to show our class of all the lovely castles and breathe-taking architecture. There also may or may not have been a certain Bavarian hottie involved… (more specifically, a 22 year old aspiring architect named after a classical composer, who enjoys windsurfing, and nights under the starry night sky with a certain ‘confessed travelholic.’) So of course I love Bavaria for all the good looking guys rich culture.
One of my favourite places there is the Marienplatz, which is the city centre. Remarkably, it’s been the main square of Munich since 1158, and during the Middle Ages, markets and tournaments would be held there. It’s pretty cool to think that the steps I’ve taken there have been the same path taken by knights and kings hundreds of years ago.

Anyway, on the topic of Bavaria, tradition and romance… my German prof once talked about the old Bavarian tradition of celebrating Valentine’s day, where guys compete by planting a tree on the rooftop of their crushes’ house in the middle of the night. If their tree still remains on the roof in the morning, the father then comes out to judge the possible suitor(s). The one who wins his approval gets invited inside for breakfast.

I have to say, it’s remarkable how different cultures can be. In North America, if a guy plants a tree on the top of a girl’s roof as a way of professing their love, they’re no doubt expecting it to led to some hot and heavy fun times later that night.