One thing I’d say about Düsseldorf is that I wouldn’t recommend it for anyone who’s bad with directions. I mean, thinking about my time there, the majority of what I remember was asking people where Graf Adolf Strasse was. And to actually remember what this random street in Germany is called now that I’m back home, should give you an estimate of how many times I had to ask for directions.

And it’s totally not because I’m incapable of figuring out the complex workings of the German city road system – this one German lady and her son asked me for directions (which ironically I knew because I had passed that street moments ago). They didn’t speak any English either, but I managed somehow entirely in German.

German lady: have you lived here all your life?
me: erm, no…actually I’ve only been here for about an hour

The only photo I ended up taking of Düsseldorf is this one of this street: 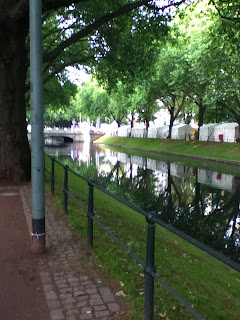 I was supposed to met a friend from Hattingen the next evening for dinner, but I couldn’t really bear the idea of spending another day being lost in Düsseldorf, so I ended up rescheduling our plans (for next year, which I still feel bad about) and reserved a morning train to see my friend Martin the next day in…Berlin!