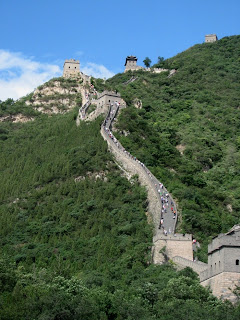 In honour of the Chinese New Year, I decided to dedicate this post to one of the greatest world wonders, The Great Wall of China.

I traveled to Beijing two summers ago. I remember the flight there really well because it was during the peak of the swine flu outbreak (not even global epidemics can stop me from traveling). Before we were let off the plane, government officials came in with these thermometer like guns which they scanned over our foreheads. If you were under a certain temperature, they would let you go.

The unfortunate ones were led off by strict looking officials into a private room for further questioning. Or at least, that’s what they told us…

There’s a bus that takes you directly to The Great Wall which is great, but make sure you do some research, as some tour companies are scams. It was weird arriving at The Great Wall for the first time because on one hand, you’re starring at this massive work of ancient civilization…and then you look behind you, and oh look, there’s the highway. For some reason, I had always envisioned The Great Wall to be a long continuous pathway, where walking across would feel like strolling through a park or something. Ha ha ha. Let’s just say that calling the Great Wall a breezy flat path is like stating that Hitler had no interest in world domination.

The Great Wall is best described as a never-ending set of stairs, and walking upward for a good two hours in the blazing summer sun will probably shed five pounds off of you immediately. The steps are about half a meter high so the “walk” is actually quite comparable to rock climbing. The sight is incredibly amazing though, and to think that you’re climbing up a path that’s made as early as 220 BC is simply mind-blowing.

Along the way, there are rest areas usually equipped with a gift shop in which you can purchase your much needed overpriced bottle of water. I remember purchasing a panda keychain with “I love BJ” engraved on it, which should make me quite popular among my guy friends back home (BJ stands for….Beijing, obviously). There’s some cool statues and canons scattered around which is great excuse to stop climbing, without seeming out-of-shape to your newly acquainted friends, to take lots of touristy photos and read up on some ancient history. The trek downward is surprisingly effortless, and once you’ve reached the bottom…hey look, there’s a Starbucks!

Some interesting facts about The Great Wall: 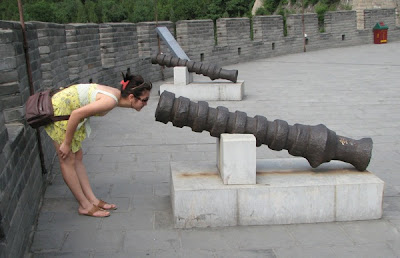 – It is actually not a long continuous wall, but broken up in different segments. Walking its entirety would be impossible despite how ambitious you are.

– Approximately 70% of the Chinese population worked on The Wall during the Qin Dynasty.

– Despite contrary belief, it cannot be seen from outer space.

– It is the largest man-made structure in the world.

– Thousands of workers died constructing The Wall. Rather than disposing their bodies, other workers continued building it on top of them. Therefore, some of them are actually buried inside The Wall. (Nice co-workers, eh?)

– Locals have stolen pieces of brick from The Wall to build their own homes.

– Richard Nixon and Barack Obama have both visited.

– There is a Starbucks at the base of The Wall.

For anyone taking a trip to The Great Wall of China, be sure to wear some comfortable shoes. If you get thirsty, remember – you can always purchase a mocha frappacino. I’m off to Montreal for the weekend, but to everyone celebrating, “gung hay fat choy!”