It was a dark and stormy night as me and my friend Raph ran down a long, and winding hill, stopping every now and then to catch our breath beneath some trees. There were church bells ringing in the distance, like the soundtrack to a creepy horror movie, and occasionally we would past menacing road signs depicting bear-like images, and the odd man standing by the picnic table sharpening his knives….

This, by the way, is a true story.

Ok, maybe I should start from the beginning.

When I was planning my Europe trip during the summer, my friend Raph naturally suggested for me to visit him in Tubingen. Of course I would have visited him anyway, but the fact that it was the town my German prof was from, I had already sort of fallen in love with the place two years ago when she would bring in all the gorgeous photos of her hometown to show us in class.

Tubingen ended up being the last German city I would visit before I left for Switzerland, and while I only spent a day there, it was probably one of the most memorable experiences of my time in Europe (and that says a lot).

Near the university, there is the Neckarinsel (Neckar Island) which is the scenic park, with the river which divides through the rows of historical looking houses. There is a cute little yellow house there that attracts quite a lot of tourists because it is the former home of the German poet, Friedrich Holderlin.

We walked along there and also went to the Altstadt (old town), the Rathaus (city hall) on Marktplatz (market place), and the Schloss Hohentubingen (a castle!) before deciding that we can not possible walk any further until we get some ice cream and Turkish food. As we were eating, we saw a sign for a carnival that was happening, and being the spontaneous people that we were, decided to go there right away.

We were expecting possibly clowns who made balloon animals and people on stilts or something, but instead, we came face to face with the most bizarre scene ever!!! 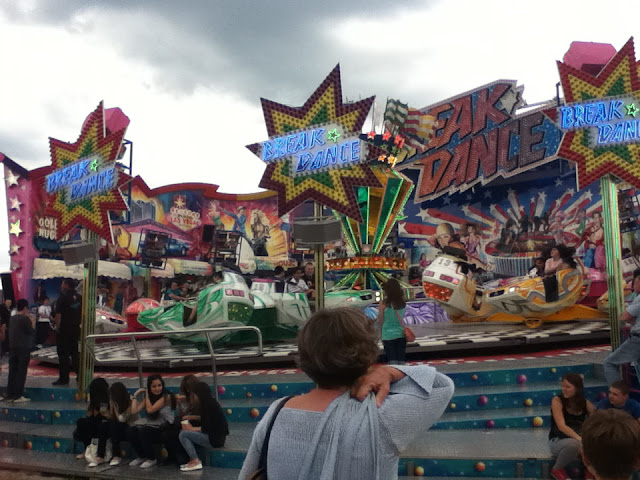 If we were in Asia, it would make sense, but in a little town in Germany, all the flashing neon lights screaming out words like “BREAK DANCE,” and pictures of pink care bars, just seem completely out of place. 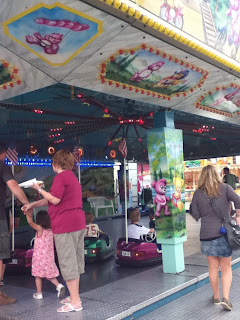 The whole scene was just too funny, and after walking around the carnival a few times we realized that we were the only ones there who were not:

Raph then decides we should drive a bit out of town, to a place called Wurmlingen, to visit the little chapel perched on the hill. The walk up took about 25 minutes, and the scenery from up top was pretty amazing. Looking down, we could see all of the houses in the countryside.

It is there that we were able to bask in the glory of the cool evening air, contemplate life, and ask each other deep, thought provoking questions, such as, what should we eat for dinner?

And then it started to rain.

…which takes us back to the beginning of this story… with me and Raph running down the hill. The fact that I had watch a good number of horror movies in my high school days doesn’t help our situation either, as with every few steps we ran, I would remark on how similar our situation is to many of those “serial killer with machete chasing young people in a pastoral setting, in the thunderstorm with church bells chiming” type slasher films.

Luckily, we got to his car in one piece, and he drove us back to his apartment, where we ordered pizza and drank some much needed alcohol. Unfortunately, I only brought one pair of jeans with me (I packed mostly shorts thinking it was going to be really hot in Germany and surprise! ….it wasn’t)…and with that pair being completely drenched, we were forced to do some laundry so that I would have clothes to wear the next day. Unfortunately, Raph’s laundry machine broke halfway into the cycle (no wonder the previous tenant gave it to him for free), and I was left with a pair of soapy, wet jeans.

For the remainder of the night, rather than going out with his friends as we originally planned, we ended up watching movies, while I attempted to dry my jeans with my hair dryer. I could tell Raph felt bad since he gave me lots of chocolate to cheer me up (and for the record, that always works), but I told him that I had a great day… and I meant it. I certainly had quite the adventure!

(And while my jeans never dried in time for Switzerland….well, that’s another story).